A network interface card (NIC) is a circuit board or card that is installed in a computer so that it can be connected to a network.

Networking cables are networking hardware used to connect one network device to other network devices or to connect two or more computers to share printers, scanners etc. Different types of network cables, such as coaxial cable, optical fiber cable, and twisted pair cables, are used depending on the network’s physical layer, topology, and size. The devices can be separated by a few meters (e.g. via Ethernet) or nearly unlimited distances (e.g. via the interconnections of the Internet).

These are the cables that are used most frequently for Ethernet purposes. They are called “twisted pair” because there are pairs of wires in the cable that are twisted together. This is done to prevent electromagnetic interference from outside sources and other wire pairs in proximity.

There are two main classifications of twisted pair cables: The first one is Shielded Twisted Pair (STP) and Unshielded Twisted Pair (UTP).  STPs have an extra layer of shielding to make them more resistant to outside interference, and, thus, have an improved ability to maximize bandwidth in comparison to UTPs. 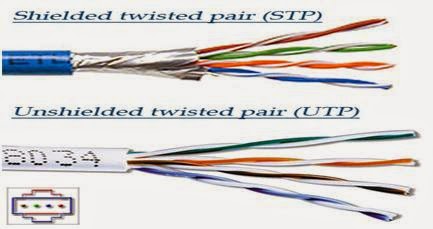 The drawback to this is that they are far heavier and cost more, which is why their primary use is within high-end applications where prevention of interference is a top priority.

The second classification has to do with categories that are separated from one another on the basis of data transfer per second. The categories in standard use are Category 5e (1 Gbps) and Category 6 (10 Gbps), as the older categories have become outdated due to performance standards that do not meet the modern-day demands of the IT industry.

For those of you who grew up a few decades ago, you would have seen these cables in use to connect TVs to home antennas and set up the very first Ethernet networks. They work by having a copper wire covered by insulation and other forms of shielding.

In addition to their heavy weight and thickness, their less-than-stellar data transfer rates (10 Mbps) led to them being phased out when twisted pair cables came into use. These cables are outdated in their use, but they are included in this article because some buildings may still use these ancient cables.

These cables work much differently from the ones that have been described thus far. A thin cylinder of glass is surrounded by multiple layers of coating that provide protection and prevent interference. Unlike the other cables, fiber optic cables transmit data using pulses of light. While these cables may be more expensive in cost, they can transfer information at extremely fast speeds in high-traffic environments.

In September 2012, NTT Japan demonstrated a single fiber cable that was able to transfer 1 petabit per second (1015bits/s) over a distance of 50 kilometers.

A hub is basically a multiport repeater. A hub connects multiple wires coming from different branches in a small network

A switch is identical to hubs but more efficient than hubs.

RJ45 is a type of connector commonly used for Ethernet networking. It looks similar to a telephone jack, but is slightly wider. Since Ethernet cables have an RJ45 connector on each end, Ethernet cables are sometimes also called RJ45 cables.

The “RJ” in RJ45 stands for “registered jack,” since it is a standardized networking interface. The “45” simply refers to the number of the interface standard. Each RJ45 connector has eight pins, which means an RJ45 cable contains eight separate wires. If you look closely at the end of an Ethernet cable, you can actually see the eight wires, which are each a different color. Four of them are solid colors, while the other four are striped.

RJ45 cables can be wired in two different ways. One version is called T-568A and the other is T-568B. These wiring standards are listed below:

The T-568B wiring scheme is by far the most common, though many devices support the T-568A wiring scheme as well. Some networking applications require a crossover Ethernet cable, which has a T-568A connector on one end and a T-568B connector on the other. This type of cable is typically used for direct computer-to-computer connections when there is no hub, or switch available.